*Please note that I may earn a small commission should you click any of the links in this post to make a purchase. However, I reviewed this book independently of any commissions or payments.

Every so often, you’ll actually find me reviewing a hot, new book on this blog for your reading delight. Like today.

“Call Me Zelda,” by Erika Robuck, published on May 7 this year. And I actually won an advanced copy through a Goodreads giveaway. I was so stoked, I might as well have just met Jesus.

But in all reality, I was excited to read Call Me Zelda, because it’s about Zelda Fitzgerald. And I have a serious fascination with the Fitzgeralds (who else is dying to see “Gatsby?”).

Just a heads up, though: Call Me Zelda is historical fiction … and this was my first experience reading the genre.

Here’s what I thought of Call Me Zelda. 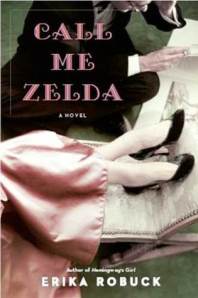 Erika is a great writer. I genuinely enjoyed her very human portrayal of the famous writer and his muse. Her prose was fluent, sometimes poetic, and encompassing of the time period for which she wrote: the 1930s.

However, I felt like the plot line and character interactions fell flat. And thus, the story tended to drag.

Here’s the scoop: rather than concentrating on the famous party days of Scott and Zelda Fitzgerald, Call Me Zelda focuses on their later years, when Zelda was committed to a Baltimore psychiatric hospital in 1932. The narrator is a fictional character, a psychiatric nurse named Anna Howard, who tended to Zelda while also fighting her own demons from the past.

The result is that we get a much more human, emotional look into the complicated and sometimes chaotic nature of the Fitzgeralds’ relationship. We see their tenderness, and we understand how they destroyed each other. This was the part I enjoyed most about Call Me Zelda.

Unfortunately, I was not a huge fan of the nurse, Anna. And since she was the narrator, this took away from the story for me.

I think Erika could have done much more with Anna to add spice and conflict to the plot. I appreciated Anna’s good, caring nature, but I felt like she was a bit too perfect. And thus—even for a Goody two-shoes like me—she wasn’t real enough. The drama of the story wasn’t intense enough.  And it sometimes bored me.

Would I recommend Call Me Zelda? It depends.

If you love literature and have a fascination with past figures such as Hemingway and the Fitzgeralds … then yes! I think you will either enjoy or genuinely appreciate Call Me Zelda. Even if I sometimes found the story slow, I still appreciated the new life that Erika breathed into these two literary icons. And I wanted to know what happened at the end.

But if you prefer more contemporary work, action, or drama, then I’d recommend passing on this one. Instead, save it for a friend like Gil, the nostalgic screenwriter played by Owen Wilson in Woody Allen’s movie, “Midnight in Paris.”

2 responses to “BOOK REVIEW! ‘Call Me Zelda’ by Erika Robuck”