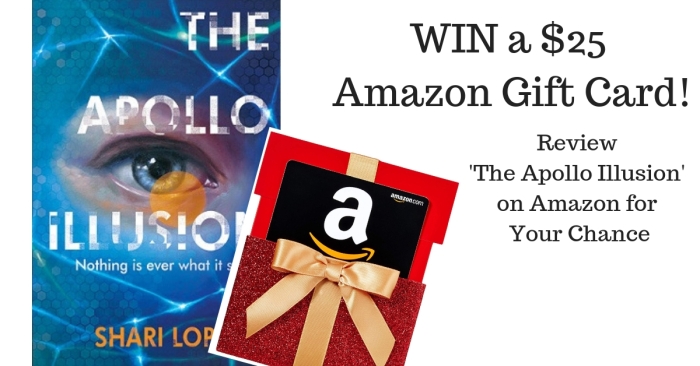 Have you read my book, The Apollo Illusion, and posted about it on Goodreads, Facebook, your blog, or elsewhere? Have you told friends or family about it?

Why not turn your review into a shot at winning a $25 Amazon gift card?

That’s it! After the giveaway ends in two weeks on Dec. 8, I’ll randomly draw one lucky winner to receive the $25 Amazon gift card and notify him/her by email.

As an indie author, Amazon reviews are VITAL for me. Amazon’s algorithm works like this: the more reviews that are posted about my book, the more Amazon shows it to new readers. This means more people could potentially buy it.

So hurry (you only have one week left) and enter for your chance to win that $25 Amazon gift card (more books, anyone?). Post your review now!

Due to wider distribution, prices for my debut novel, The Apollo Illusion, will soon be going up. If you haven’t grabbed a copy yet, now’s the time while the e-book is only $2.99 and the paperback is $10.99.

These changes may happen as early as December, so if you’re curious to read it, hurry and buy it now!

About The Apollo Illusion

Nothing is ever what it seems in this riveting science fiction dystopia about a future society’s frightening overdependence on technology.

The year is 2150, and bullied nineteen-year-old Flora can no longer ignore the burning curiosity to learn what’s behind the towering Wall surrounding her home state of Apollo. Citizens still read books, discuss philosophy, and send text messages, but questioning The Other Side is forbidden.

When Flora’s naïveté accidentally reveals a dark secret about Apollo, she’s forced into an isolated web of truth, lies, and survival. Fearing for her life, she leaves behind a clue for her childhood friend, Andrew, placing her last hope in their special bond.

The Apollo Illusion is a story for the hackers, the techies, the seekers, and the rebels of the world.

“This is a story that’s well-written and the mysteries contained within the plot draw you in and keep you hooked from one page to the next. The Apollo Illusion should occupy a spot on the to-read list of any true dystopian sci-fi fan.” — John Coon, author of Pandora Reborn

“The timely release of The Apollo Illusion comes in the wake of ‘alternative facts’ and attacks on the ‘fake news’ media from President Trump and his administration … It’s a dark look at a future more closely in alignment with the present than Lopatin anticipated when she completed the first draft four years ago.” — Arizona Daily Sun

Guys, the e-book price is crazy affordable: only $2.99. So if the storyline piques your interest (even just a little bit), I really encourage you to buy The Apollo Illusion now!